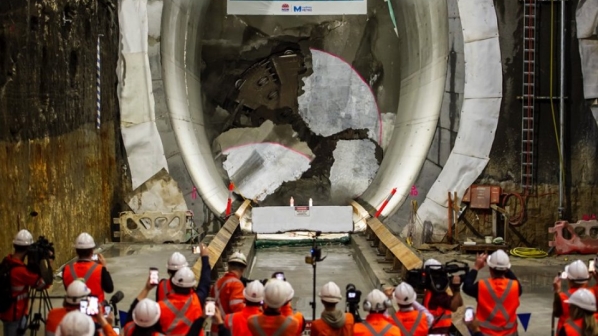 Since launching in February, Mabel has excavated about 290,000 tonnes of sandstone and shale. The TBM will now undergo maintenance before being re-launched at Crows Nest and tunnelling towards the next station at North Sydney.

Forming Stage 2 of the metro, the Sydney Metro City and Southwest project will extend the line from Sydney’s Nortwest region, beneath Sydney Harbour, through seven new underground stations in the city centre and beyond to Bankstown.

The project involves the construction of twin-bore 15.5km-long tunnels linking Chatswood with Sydenham. Five TBMs are required for the 31km of tunnelling, including a specialised TBM for work under Sydney Harbour due to the geology beneath the sea bed.

The Sydney Metro Northwest metro line between Tallawong and Chatswood, the first metro line in Australia, opened on May 26.

TBM Mabel and TBM Wendy are boring 6.2km of tunnel, which will link the recently-opened Metro Northwest line at Chatswood to the harbour’s edge at Blues Point.

“This is incredible progress on the next stage of Sydney Metro - City and Southwest, with close to 14.5km of tunnel already built,” says minister for transport, Mr Andrew Constance.

“We’ve already seen the success of Northwest Metro and once the next stage of this game-changing project opens, there will be turn-up-and-go Metro train services to 31 stations along a new 66km railway.”