SERVICES on the first 15.5km section of Taipei’s fully-automatic MRT Circular Line from Wugu Industrial District to an interchange with the metro Green Line at Dapinglin were launched on January 31. 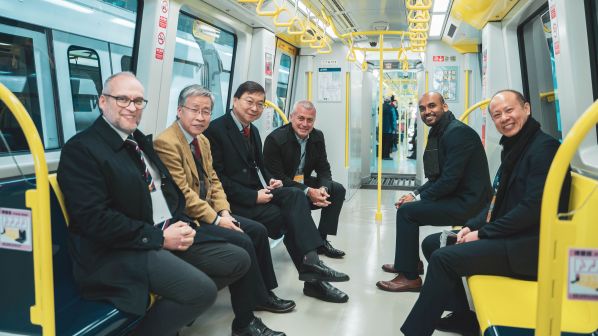 The line is equipped with CBTC grade of automation 4 (GoA 4) and has 14 stations, including 13 elevated and one underground along with a level 5 maintenance depot for heavy maintenance.

The line is the first stage of the 52km Circular Line that will enable commuters to travel directly from outer Taipei to New Taipei City, without having to first connect in central Taipei. Planning for the north and south sections has been approved and, when the eastern section is completed, the line will run through 14 administrative districts in Taipei City and New Taipei City, with 14 interchanges connecting with radiating metro lines.

Taipei’s Department of Rapid Transit Systems (Dorts) awarded Ansaldo STS and AnsaldoBreda (now Hitachi Rail Italy) a €220m contract in April 2009 to supply electrical and mechanical systems. Commercial services were due to begin on the 14-station line in late-2018.

Hitachi Rail Italy’s €114m share of the contract included supplying 17 four-car aluminium-body medium-capacity trains, which can carry up to 650 passengers at up to 80km/h. The fleet has been designed to reduce operating costs, improve passenger comfort, and increase capacity, service availability and reliability.

The project is the first systems turnkey project incorporating both the trains and sub-systems delivered by Hitachi Rail Italy in the far east.

The opening of Circular Line Phase 1 takes the total length of the Taipei metro to 152km, with 131 stations. Six major lines are being added to the MRT network, taking the number of interchanges to 18.

“The CBTC GoA 4 solution we have developed for the Taipei Rapid Transit Corporation (TRTC) is the first of its kind in Taiwan ushering in a new era in driverless technology for the Taipei and New Taipei City metro authorities,” says Hitachi Rail Group CEO, Mr Andrew Barr.