IRJ at InnoTrans 2014: DURMAZLAR, Turkey, has unveiled GreenCity, it's new light metro vehicle platform at the InnoTrans outside track area. 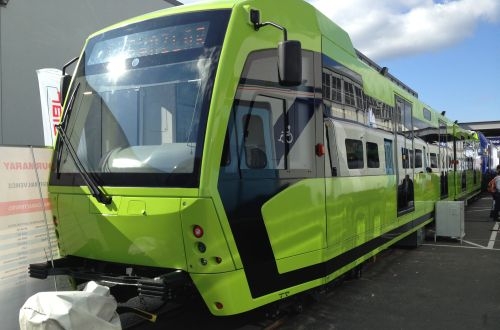 The 90km/h, standard-gauge vehicle can seat 288 passengers and offers accelaration of 1.2m/s. Durmazlar is responsible for components, car bodies and vehicle assembly while Siemens has supplied traction equipment. The bi-directional vehicle is 28.1m long and is formed of two sections.

GreenCity follows Silkworm, Durmazlar's inaugural LRV platform which was unveiled at InnoTrans 2012, and is currently without a buyer. The company had hoped to offer it to its home city of Bursa. However, the city cancelled a tender for 60 light metro vehicles earlier this month and Durmazlar says it is consequently exploring bids for upcoming opportunities in Turkey, as well as the international market.