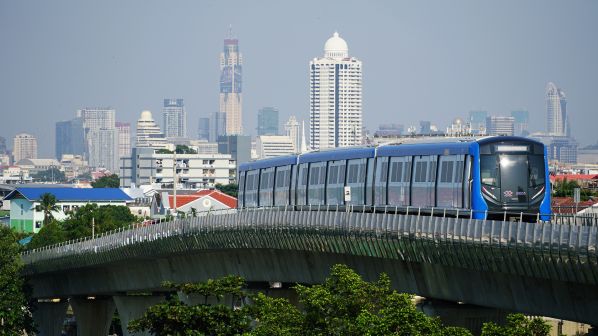 THE Mass Rapid Transit Authority of Thailand (MRTA) has received two bids for a PPP contract to fund, design and build the western section of the metro Orange Line in Bangkok, which will run for 13.4km from Thailand Cultural Centre to Bang Khun Non.

Bids have been received from a consortium of Bangkok Express and Metro, operator of the Bangkok MRT system, and from Italian-Thai Development. The contract is worth Baht 140bn ($US 3.9bn).

A fresh round of bidding opened on May 27 and ran until June 10.

At Thailand Cultural Centre, the new route will connect with the eastern section running for 22.5km to Min Buri, which according to MRTA was 95.3% complete at the end of June and is due to open in 2023.

The preferred bidder for the PPP contract will also operate and maintain the full 35.9km Orange Line for 30 years.

The full Orange Line comprises 27km of underground and 8.9km of elevated line, with 21 underground stations and seven elevated stations.