A ceremony was held in Vienna on October 8 to mark the start of construction on a U-Bahn project to split Line U2 and build two extensions to create a longer Line U2 and a new Line U5. 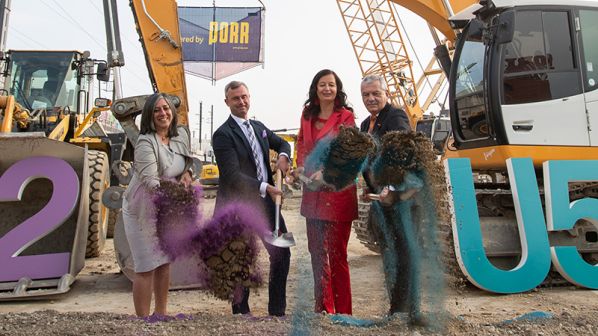 The first phase, which will cost more than €1bn, will involve boring a tunnel from Matzleinsdorferplatz north to Rathaus, where new platforms for Line U2 will be built beneath the existing U2 platforms. The latter will then be used by the new Line U5 which will take over the existing Rathaus - Karlsplatz section of Line U2. A new section of Line U5 will be constructed to the north of Rathaus to reach Franckplatz in 2024 followed by a further section via Michelbeuern-AHK to Elterleinplatz by 2026. 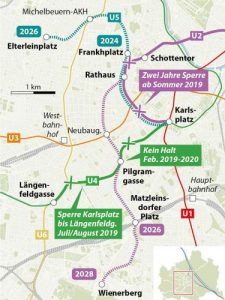 The new U2 section will be also be completed in 2026, while an extension from Matzleinsdorferplatz south to Wienerberg is planned for completion by 2028.

During construction of the extensions, the Rathaus - Karlsplatz section of Line U2 will be closed for two years starting in summer 2019 while Pilgramgasse station on Line U4 will be temporarily closed and rebuilt between February 2019 and 2020 to provide an interchange with Line U2. The Karlsplatz - Längenfeldgasse section of Line U4 will be also closed in July and August 2019 to facilitate work at Pilgramgasse station.

Line U5 will be the first metro line in Vienna to operate fully automatically.