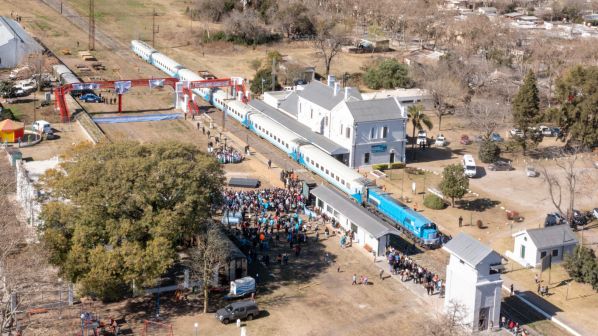 Passenger trains have returned to Canada de Gomez for the first time in 45 years.
Photo Credit: Ministry of Transport

PASSENGER services are running once again over the 71km line between Rosario and Cañada de Gómez in the province of Santa Fe in Argentina, following the completion of the latest project under the government’s railway modernisation plan.

Passenger services last operated on the route in 1977, and to permit their reintroduction the Ministry of Transport and state-owned operator Argentinian Trains (TA) have undertaken track renewals on three sections of the line, replacing sleepers and upgrading level crossings to improve safety.

The service is operated with three long-distance coaches and a generator car hauled by a diesel locomotive, offering a total of 216 seats.

The journey time between Cañada de Gómez and Rosario is currently 2h 10min, and work is underway to reduce this by raising the maximum line speed from 30km/h to 60km/h.

“We came into government to put Argentina back on its feet, and to do that what we need is fairer development across the country,” said the president, Mr Alberto Fernández, as he inaugurated the restored passenger service.

“The railway is needed to put an end to the disintegration of the country and to unite us. The railway connects us, makes us equal, and these are two values that we must restore in these times we live in.”

“In the two and half years of our administration we have restored 15 services, which represent 56 communities that had been abandoned,” says minister of transport, Mr Alexis Guerrera. “Today the railway is once again reconnecting our people.”

According to Guerrera, the railway modernisation plan has seen over 1700km of track upgraded.

Other recent projects to reintroduce passenger services include the route between La Banda and Fernández in the province of Santiago del Estero.

At a cost of Pesos 65m ($US 486,680), track renewals were undertaken to replace 496 sleepers and lay 1275 tonnes of stone ballast, as well as station repairs and refurbishment at La Banda and Fernández.

For detailed data on rail projects in Argentina and around the world, subscribe to IRJ Pro.