The new undertaking succeeds Shift2Rail with activities to begin fully in March. 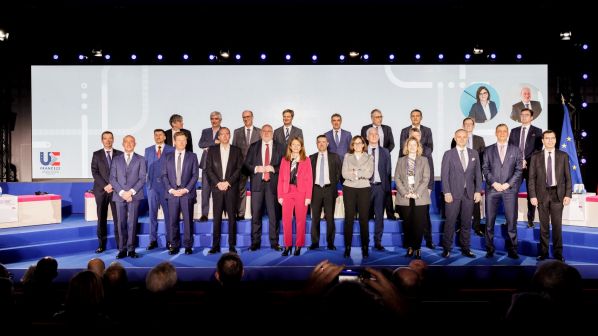 The launch of Europe's Rail in Paris on February 22.

The ceremony was attended by several ministers of transport from member states, including French minister delegate for transport and president of the Transport Council, Mr Jean-Baptiste Djebbari and German federal minister for transport and digital, Mr Volker Wissing, along with representatives from the European Commission (EC) and the rail sector, including Europe’s Rail’s 25 founding members.

The new body is Europe’s largest rail research and innovation programme and as well as existing Shift2Rail members is supplemented by an additional 25 members, from the rail supply industry, rail operating community, infrastructure managers and research institutes. The programme is worth €1.2bn, of which the European Union (EU) will contribute €600m from its Horizon Europe programme.

The terms of Britain’s exit from the European Union mean that Network Rail is currently unable to participate in Europe’s Rail despite being a founding member of Shift2Rail, where it continues to work until the end of the programme in 2023. Europe’s Rail told IRJ in Paris that while both sides would like to participate, Network Rail’s access to the programme remains “a political decision.”

“Europe’s Rail will build upon the successes of Shift2Rail and ensure that the solutions coming from the programmes are deployed in the market,” says Mr Carlo Borghini, Europe’s Rail executive director. “We are looking forward to launching our first calls for proposals next month and to fully begin our activities.”

The objective of Europe’s Rail is to deliver a high capacity integrated European railway network by eliminating barriers to interoperability and providing solutions for full integration. Traffic management, vehicles, infrastructure and services are all included in the remit, with the aim of a faster uptake and deployment of projects and innovations. While Shift2Rail provided the foundation for new technologies, Borghini told the conference that work in Europe’s Rail will accelerate towards deployment.

“The output of Europe’s Rail will give the railways an important boost in making climate commitments a reality,” says Mr Andreas Matthä, chairman of the Community of European Railway and Infrastructure Companies (CER). “I highly commend the decision makers’ ambition in joining forces towards climate neutrality, despite the economic challenges of the pandemic.”

“Increasing the focus on rail research and innovation is crucial to achieve the ambitious objectives to decarbonise the transport sector,” says Mr Henri Poupart-Lafarge, chairman of the European Railway Industry Association (UNIFE). “If we truly want rail to be the backbone of sustainable mobility, we need to deliver new technologies and solutions that will make rail more attractive, reliable, cost efficient and even more environmentally-friendly.”

During the ceremony, Borghini unveiled the new Europe’s Rail logo, which was co-created by the 25 founding members.