DB and BDL believe they can convert 4.3 million passengers from air to rail. 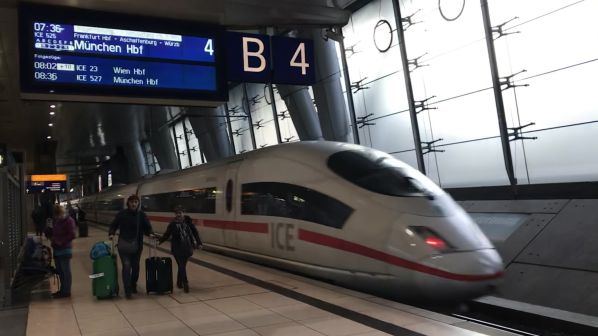 New check in procedures at Frankfurt airport station will improve the transfer process for passengers.

THE German Federal Association of the German Aviation Industry (BDL) and German Rail (DB) have launched a joint action plan to strengthen transport integration between air and rail, which will encourage more people to use rail, helping to reduce overall greenhouse gas emissions in the transport sector.

BDL and DB see the potential for around 20% of those travelling by plane within Germany - around 4.3 million people per year before the pandemic - to choose rail instead. This will be achieved by offering reliable services, attractive offers and ongoing infrastructure expansion.

Germany’s aviation sector carried around 23 million passengers in 2019, with 8 million connecting with long-haul flights and 15 million making domestic trips. Both BDL and DB believe that around a sixth of CO₂ from domestic aviation could be avoided by reducing domestic air traffic.

The agreement acknowledges that rail CO₂ emissions are significantly lower than from aviation and that improved integration of the two transport modes will result in a substantial reduction in the greenhouse gases caused by transport. The aviation industry forecasts a 1.5% annual increase in fuel efficiency between now and 2021, partly achieved by the retirement of older aircraft during the pandemic.

Interestingly, DB, which advertises its ICE services as operating 100% from green electricity, admits that it will take until 2030 before 80% of traction electricity meets this standard. It won’t reach 100% until 2038. Some high-speed lines continue to be directly fed with power from coal fired power stations at 15kV ac, 16.66Hz frequency, which is required for traction current in Germany.

Among the specific actions are the previously announced expansion of the Lufthansa Express Rail service to include more domestic German routes with the addition of several new fast Sprinter connections. The aviation industry intends to reduce short-haul flights such as Cologne - Frankfurt and Berlin - Nuremberg, most of which connect with long-haul flights at hub airports such as Frankfurt. ICE services will step in to fill this void.

Implementation of parts of the planned Deutschland Takt regular interval timetable will also speed up journeys to airports over the next few years, with significant reductions envisaged in the late 2020s/early 2030s as new infrastructure becomes available. Short to medium term this includes:

Improving service quality is seen as important for rail to replace feeder flights and avoid car journeys to airports. Simplified baggage handling arrangements to ease the transfer from train to plane for long-haul travellers are planned with pilots set to take place at Frankfurt Airport where the ICE station is more than 500m from the check-in area.