Germany commits to increasing passenger and freight on rail

GERMANY has committed to doubling rail passenger numbers by 2030 and increasing rail’s share of freight from 19% to at least 25% by 2030. 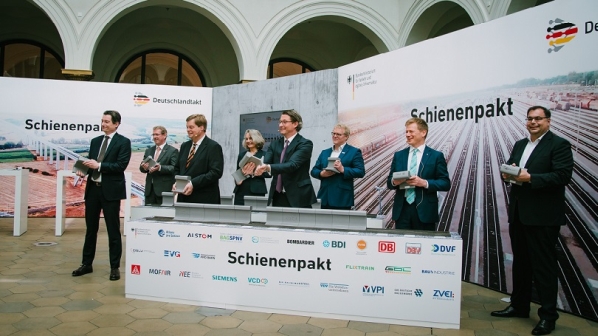 The country will also introduce a regular-interval national timetable with half-hourly services between all major cities, as part of a “master plan for rail transport.”

The plan was outlined at the Rail Summit 2020 held on June 30, where the federal minister of transport, Mr Andreas Scheuer, the federal railway commissioner, Mr Enak Ferlemann, and 24 railway industry representatives signed a pact to strengthen the rail sector in Germany.

The master plan, developed through six working groups over the past two years, involves a number of initiatives including:

Under the new national timetable, a half-hourly service will be introduced between Berlin and Hamburg from the December timetable change, with this frequency extended to all major cities over the coming years.

The plan also includes a change in the way infrastructure projects are developed. Instead of an individual route analysis, new project analyses will focus on the benefits to the national network.

The master plan includes increased federal investment in rail infrastructure - from €1.5bn annually to €3bn “in the medium term” and €4bn “by the end of the decade.” The plan also includes reduced tax costs and increased digitalisation of train control.

“Despite the coronavirus crisis, the federal government is sticking to its goal of doubling passenger numbers in Germany,” says Mr Dirk Flege, managing director of national pro-rail lobby group Allianz pro Schiene. “In freight transport, for the first time it is officially stipulating that rail’s market share should increase to at least 25% by 2030. Both are signals of great political importance, especially in these coronavirus times. Now it depends on the implementation, so that the promised decade of rail does not become a decade of announcements.”

“I am particularly pleased that the German regular-interval timetable is recognised as a central building block for the growth of rail and the shift in traffic,” says German Federation of Regional Passenger Rail Authorities (BAG-SPNV) president, Ms Susanne Henckel. “This means that regional and long-distance transport can be better coordinated in the future, which will result in a more attractive offer.

“Politicians are now required to create the financial and regulatory prerequisites listed here for implementing the master plan.”

BAG-SPNV proposed the development of a steering committee, as well as the oversight of independent observers and experts, in order to achieve the measures included in the plan.