Traditionally only one in five people working in the rail sector are women. 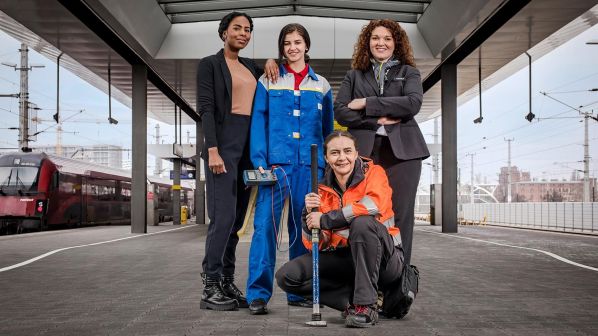 COMPANIES and organisations across the rail industry have celebrated the role and contribution of women to the sector while encouraging others to see it as a viable career option, as part of International Women’s day on March 8.

A 2018 report from the Community of European Railway and Infrastructure Companies (CER), On the Development of women’s employment in the European railway sector, found that women traditionally comprise just over 20% of the workforce in rail, although this share is steadily increasing.

CER says studies show that companies with a balanced workforce and an inclusive culture are six-times more innovative and have significantly higher problem-solving competence. As increasing automation and digitalisation in the rail sector opens up new job opportunities that are attractive for women, the association says it is important to ensure that diversity is guaranteed, removing the obstacles that hinder competitive equal opportunities.

“To be successful as a business and avoid future labour shortages, talent must be hired and young women must be attracted and retained,” CER says. Popular measures introduced by CER members include more flexible working times and welfare systems to help with work-life balance, measures to promote women’s employment and career development, mentoring to attract young women and encouraging Science, Technology, Engineering, and Mathematics (STEM) studies.

“At Belgian National Railways (SNCB), the openness to women is reflected more and more in the figures every year,” says SNCB CEO and member of the CER management committee, Ms Sophie Dutordoir. “However, the question of diversity is not just about gender distribution. A company is a reflection of the society in which it evolves, with its wide range of diversities in terms of age, abilities, gender, lifestyle choices, social status, culture, etc. Diversity is natural: every talent has its place at SNCB. It’s a state of mind that must permeate the whole company.”

Spanish national operator Renfe has promoted the day by launching a new campaign aimed at showcasing the various roles available to women within the company, including working in the engineering, operations, customer service or digital innovation sectors, as well as training as train drivers.

The “Contigo sumamos” (with you we add up) campaign is being promoted across the Cercanías commuter rail networks as well as with a video on the AVE high-speed and long-distance services.

Ms Emma Watson, one of the youngest station managers in Britain, has worked for infrastructure manager Network Rail (NR) for 11 years. “Providing you know your stuff and are willing to learn there are numerous opportunities,” she says. “I have worked in several parts of the business from freight to projects and even took a couple of years away from NR where I worked for a train operator in property and projects. It has historically been a very male-led industry, but I’ve seen a real step change in my 11 years in rail which is refreshing, although I think it’s fair to say that there is still some way to go, and I look forward to being part of that journey.”

“Do I wake up every day with the thought of being a woman? No, I just wake up and go to work,” says Netherlands Railways (NS) CEO and member of the CER management committee, Ms Marjan Rintel. “But I do understand that it is important to sometimes reflect on the fact that I am a woman leading a big company. To show every little girl looking at a toy train: there are no limits to your ambition.”

Austrian Federal Railways (ÖBB) has set a goal to increase the proportion of women across the company from 14% to 16% by 2023.

“To be successful as a company, but also as a sector, we need to recruit talent and increasingly reach out to women,” says CER chair and CEO of Austrian Federal Railways (ÖBB), Mr Andreas Matthä. “A diverse workforce at all levels creates a thriving workplace. It is my goal as CER chair and ÖBB CEO to achieve more diversity and a more balanced gender ratio in our sector. To this end we are currently working with our social partners towards a binding European agreement to encourage more women to take up rail professions.

“Women make up more than half of the population and thus also the productive, creative and inspiring workforce in Austria. ÖBB cannot, does not want to and must not do without this potential.”