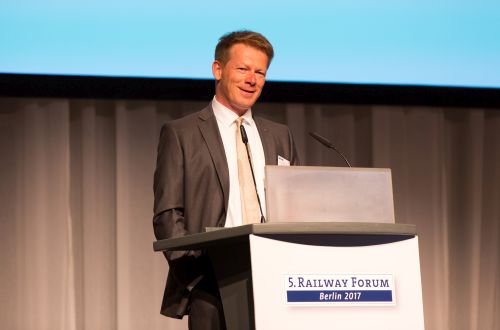 Despite unprecedented investment of around €100bn in infrastructure improvements and new railway vehicles since the reform of DB in the mid-1990s, which has produced improved performance, Lutz says the railway is in a “parallel situation to the former situation it faced” in the early 1990s. Indeed, he said its very existence is under threat in both passenger transport and freight logistics from technology advances which are benefitting other modes.

In particular he says digitalisation, computerisation, and automation is giving rise to new players which have a different agenda to traditional companies like DB. However, he was clear that this should encourage rather than phase companies working in the railway sector.
“We have a great history and this should encourage us to go into the future and to have the self-confidence that we will find the solutions in the long-term,” Lutz says.

Lutz, and other DB executives who spoke during the two-day conference in Berlin, highlighted various initiatives underway at the company to harness greater innovation. This includes the Mindbox incubator where DB is funding start-up companies selected from a pool of applicants to develop their ideas into solutions that could benefit its services over a three-month period. Among the products referenced were translucent concrete which can accommodate illumination to aid passenger wayfinding; a targeted station announcement speaker system; and a smart point sensor. DB has also established partnerships with major industry players like Bombardier, ABB, and Siemens to harness digitalisation more quickly than it could by acting alone.

“The innovations we need are everywhere across the organisation and I am deeply convinced that we should think about new forms of partnerships,” Lutz says. “Five years ago, we wouldn't have thought that we would be cooperating with start-ups. However, we need different partnerships with different partners including those from different industries, and with the big players in our industry. Only that way can we face these challenges and solve them.”

Lutz also urged the supply sector to explore innovative partnerships and cooperative agreements with one another, and concluded his speech with a rallying cry to the suppliers in the audience to change, do things differently, and show that "they can find the common consensus to take up the challenge together.”