MR Vladimir Yakunin, president of Russian Railways (RZD), was unanimously elected as president of the International Union of Railways (UIC) at a ceremony held in Paris yesterday. 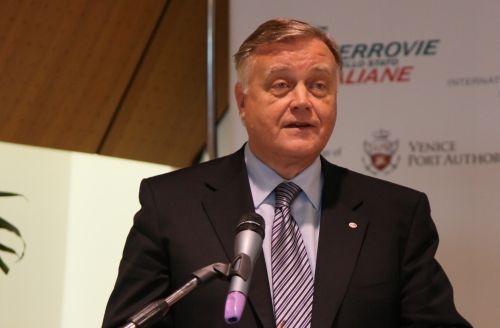 Vladmir Yakunin at the 12th UIC Sustainability Conference in Venice on October 25.

Yakunin will serve a two-year term with an option for a two-year extension, and during his introductory speech as chairman, he thanked his predecessors for their work as well as members for supporting his nomination.

Yakunin also outlined his vision for the direction of the UIC, an organisation whose work he said should be geared towards three principles: involvement, integration, and innovation. On the basis of these principles, he said the organisation should focus on participating in the creation of global transport policy and a united view of the world's railways, harmonising and unifying standards, developing united approaches to transport law, creating and implementing harmonised IT systems, defining the network of international intermodal transport corridors, and reducing the negative impact of rail transport on the environment.

"It is among the UIC's top priorities to strengthen its global status, strengthen the authority of the union, increase its recognition in the international transport market and economic community and ensure its maximum effectiveness for UIC members," Yakunin said.

"The growing requirements for sustainable development, safety and energy efficiency are leading to an increase in technical and operational standards. We are seeing a real renaissance of railways linked with the growing understanding of the efficiency and potential of rail transport."

Yakunin added that the key issues for the UIC over the next two years will include train safety and efficiency, quality and certification of railway products, while a very important objective remains the development of global transport corridors.

"The development of the UIC should proceed on the basis of the transparency of all processes and active cooperation, not only within the union, but with other international organisations," Yakunin said.