THE concession agreement for Beijing Metro Line 16 was signed on February 8 by the Beijing Municipal Government, Beijing MTR Corporation Ltd and the three shareholders of Beijing MTR. 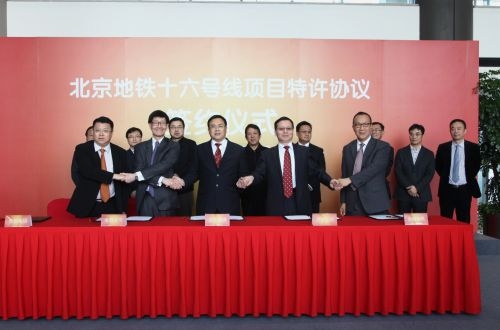 Under the agreement, subject to approval by relevant authorities, Beijing MTR will undertake the operations and maintenance of Line 16 for a 30-year term. Construction of the 50km Line, which is part of a Public-Private Partnership (PPP) project, will include 29 stations and has a total capital cost of about Yuan 49.5bn ($US 7.9m).

The project is divided into two parts. Part A is for the line's civil construction which is being undertaken by Beijing Infrastructure Investment Corporation Limited. Under the PPP arrangement, Beijing MTR would be responsible for Part B which covers electrical and mechanical systems as well as rolling stock. Part B takes up about 30% or approximately Yuan 15bn of the project's capital cost.

"As a shareholder of Beijing MTR, we are most honoured to have the opportunity to extend the safe, reliable and convenient metro service that we currently provide on Line 4, the Daxing Line and Line 14," says Mr Lincoln Leong, CEO of MTR Corporation. "Through this fourth metro project of Beijing MTR, we hope to continue to contribute to the sustainable development of Beijing."

Mr Richard Wong, general manager of Beijing MTR says: "The new line will run through three major districts and connect to the city's metro network through 13 interchange stations, making passengers' journeys faster and easier and enhancing the overall convenience of Beijing's metro system which is used by 10 million passengers a day."