ASPIRE Mining, Australia and its Northern Railways (NR) subsidiary signed an agreement with a Chinese contractor on October 12 for the completion of a bankable feasibility study into the 547km Erdenet - Ovoot line in northern Mongolia, which will link new coal mines in the region to the rail network and ultimately form part of a new connection between China and Russia. 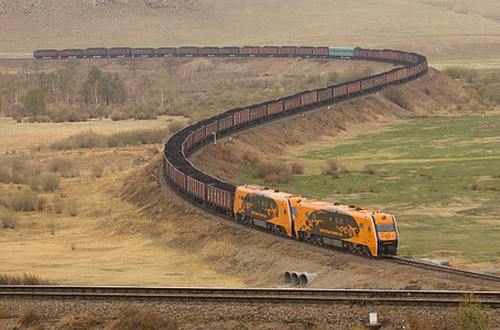 Under the binding Memorandum of Understanding, China Gezhouba Group International (CGGC) will complete the second and final stage of the bankable feasibility study by the end of March 2018. In return, NR will look to include CGGC and China Railways Construction Bureau 20 Group in the design, procurement and construction phases. NR will compensate CGGC for the work performed on the feasibility study if it is not appointed to carry out any further work on the project.

Aspire says the MoU sets a pathway for the development of both the Erdenet - Ovoot line and the eventual extension of the route to the Russian-Mongolian border at Arts Suuri. CGGC has agreed to assist NR in both the search for investors for the Northern Rail Corridor and planning for the extension.

On the Russian side of the border, a 412km line from Kyzyl, the capital of the Tuva Republic, to Kuragino on the Trans-Siberian Railway is due to open in 2022.

Extension of the line to Kyzyl, Russia and a connection to the Trans-Siberian Railway is due to be completed by 2022.

The 1520mm-gauge line will be open for bulk and intermodal freight trains and could also be used by passenger services.

The Erdenet - Ovoot - Arts Suuri line was included in Mongolia’s National Rail Policy, which was publsihed in October 2014, and the build-operate-transfer concession for the Erdenet - Ovoot section was awarded in September 2015. Under the PPP concession agreement with the Mongolian government, at least 30% of subcontract work must be carried out by Mongolian companies.

The first stage feasibility study was completed in January 2017 and this confirmed the technical and financial feasibility of the project, which has an estimated cost of $US 1.25bn minus contingencies.