EXPRESS Rail Link (ERL), the owner and operator of the Kuala Lumpur International Airport (Klia) express service, has placed an order with CNR for six four-car trains which it says will boost capacity by 50% to meet growing ridership demands. 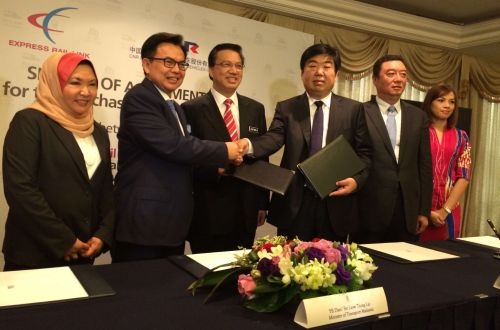 Two of the six trains will be used for Klia express, and four for Klia transit services. The vehicles will have a maximum speed of 160km/h and will offer the same or upgraded onboard features as the existing trains such as infotainment systems, Wi-Fi, wheelchair compartments, and baggage racks. They will have capacity for 540 passengers and are set to be delivered from May to November 2016.

"The sprouting of key townships along our rail corridor has also been a contributing factor as we see the increasing trend of young people opting to commute by train to work," says ERL executive chairman Mr Mohd Nazdzmi Mohd Salleh. "In 2013 our overall daily ridership increased by 20% compared with 2012 and after 12 years in operation, we welcomed our 50 millionth passenger on board in March this year."

Nadzmi refused to comment to local media when asked about a possible Ringitts 8bn extension of the line from the airport to Malacca. However, he did say that ERL is keen to participate in the upcoming high-speed project between Kuala Lumpur and Singapore which is expected to kick off in 2015.

The 57km airport link opened in 2002 and is currently served by a fleet of Siemens Desiro ET 425M EMUs, with eight trains deployed on Klia Express services and four used for Klia Transit. Ridership has grown by 40% since the opening of the Klia2 low-cost airline terminal in May compared with the same period in 2013.