DHAKA Mass Transit Company (DMTCL), which oversees the implementation of the Bangladeshi capital’s metro project, has awarded a Yen 13.5bn ($US 127m) consultancy contract for the 20km MRT Line 5 North section to a Nippon Koei-led consortium of seven businesses. 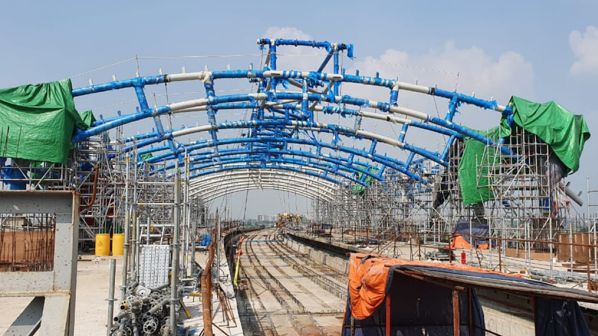 The proposed network would be built in addition to the under-construction MRT network.
Photo Credit: Dhaka MRT

The contract will cover the detailed design of the east-west line, tender assistance and supervision of construction work, including the implementation of a traffic control system, until March 2032.

The joint venture was previously awarded an engineering service contract for Line 1 in October 2018.

MRT Line 5 is divided into two sections, North and South. Line 5 North section is scheduled to open in early 2030 with a daily passenger capacity of 400,000. The section runs between Hemayetpur and Vatara and includes a 13.5km underground stretch through high-density areas between Gabtoli and Notun Bazar.

The underground South section will run from Gabtoli, via Adabor, Mohammadpur, Kalabagan, Karwan Bazar, Hatirjheel, and South Badda, to Aftab Nagar. Feasibility studies, engineering design, and procurement documentation for the South Section will be funded through a $US 33.26m loan from the Asian Development Bank (ADB), approved in November 2019.

The Dhaka MRT project is intended to reduce serious traffic congestion and fight environmental pollution in the city, which is one of the most densely populated in the world. Five lines are planned to begin operation before 2030, with the first, the 20.1km MRT Line 6, due to open at the end of 2021.