THE Beijing municipal government, Beijing MTR Corporation, and the three shareholders of Beijing MTR signed a letter of intent during the Beijing Hong Kong Economic Cooperation Symposium on November 26 to initiate a concession agreement for Part B of the Beijing metro Line 16 public-private partnership project. 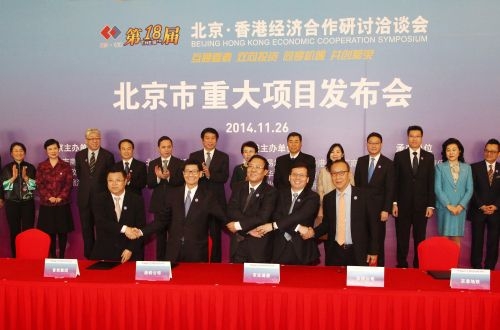 The approximately 50km north-south Line 16 will run from Beianhe to Wanping Town and have 29 stations serving three major districts: L Haidian, Xicheng and Fengtai. It will interchange with the existing Beijing network at 13 stations.

Procurement of the Yuan 49.5bn ($US 8.06bn) project is divided into two parts with Beijing Infrastructure Investment Corporation responsible for Part A, which includes the line's civil construction and accounts for around 70% of the project's capital costs. Beijing MTR, a joint venture of MTR Corporation (49%) and Beijing Capital Group (49%), and Beijing Infrastructure Investment Corporation (2%), will be responsible for Part B, the electrical and mechanical systems as well as rolling stock, which is worth Yuan 15bn. MTR Corporation intends to contribute additional equity of Yuan 2.45bn to Beijing MTR, which will be responsible for operations and maintenance of the line for 30 years.

Construction work on the project began in March 2013 and the line will open in two phases. Phase 1 will open by the end of 2016, with full operations expected to commence in 2017.

"Beijing Metro Line 16 would be Beijing MTR's fourth metro project in Beijing," says Mr Lincoln Leong, acting CEO of MTR Corporation. "Through Beijing MTR our railway business in Beijing would extend to around 150km after Line 16 opens and we will continue to contribute to the sustainable mass transit development of Beijing."