THE Philippines’ transport secretary Mr Arthur Tugade attended a groundbreaking ceremony in Parañaque City on May 4 to mark the official start of construction on the 11.7km southern extension of Line LRT1 to Bacoor in Cavite province. 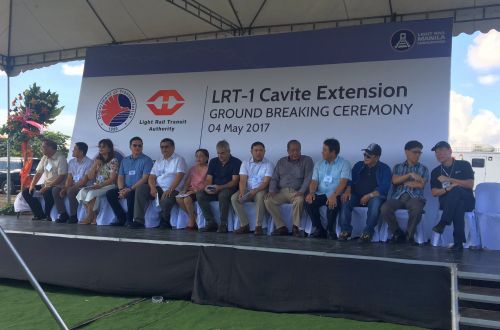 The Pesos 64.9bn ($US 1.3bn) extension will serve eight new stations in Parañaque City, Las Piñas City, and Bacoor, where the line will terminate at Niog station.

The extension will be designed for 80km/h operation and will have a commercial speed of 60km/h.

In February 2016, Light Rail Manila Corporation (LRMC) awarded Alstom and Bouygues Travaux Publics a €450m contract to modernise the existing 20.7km north-south line from Roosevelt to Baclaran and equip the extension, which will increase the daily capacity of Line LRT1 from 500,000 to 800,000 passengers.

The extension is due to open in 2021, although Tugade has asked LRMC to consider the feasibility of bringing the completion date forward to 2020.

The completion of the project will reduce the journey time between Bakoor and Makati, the country’s financial hub, from around one-and-a-half hours to 25 minutes.

For detailed data on urban rail projects around the globe, subscribe to IRJ Pro.