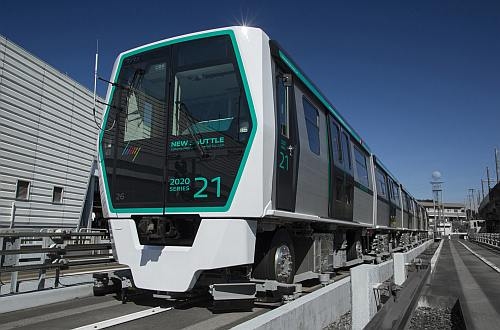 The 12.7km Ina Line shares the viaducts of the Tohoku and Joestsu Shinkansen, serving 13 stations between Omiya and Uchijuku north of the capital.

The new six-car trains are due to enter service on November 4 and have been ordered to replace 1000 series sets which date from the opening of the first phase of the line in 1983. The two remaining trains will be delivered by the end of next year.

With their double-skin aluminium bodyshells and MHI T-smover lightweight bogies, the 2020 series vehicles are almost a tonne lighter than their predecessors. The carbody has a hexagonal transverse cross-section design which bulges outwards on both size, maximising interior space. The trains are fitted with G-Fit seats, which are intended to improve passenger comfort.

MHI will display one of the 2020 series sets at the Mass Transit Innovation Japan 2015 exhibition in Chiba on November 11-13.