THE government of Mongolia has approved a new national rail policy, which includes an extension of the existing line from Erdenet to Ovoot and Arts Suuri on the Russian border that will provide a direct link to Russia's coal coking plant in the Ulug Khem Basin. 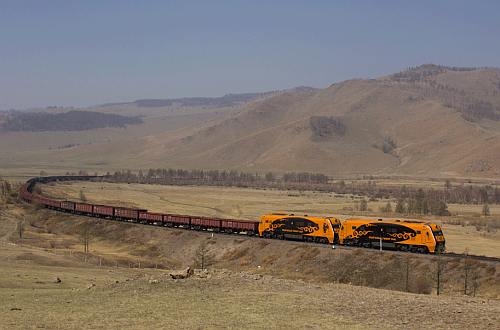 Development of the Northern Railway is consistent with the Mongolian government's recent agreements with Russia and China to deliver large-scale transport infrastructure projects to boost mineral shipments from Russia to China via the Trans Mongolian Railway, with Ulug Khem estimated to contain metallurgical coal reserves of up to 2.5 billion tonnes.

The Mongolian government is now expected to begin the process of negotiating a concession agreement for the 547km first phase from Erdenet to Ovoot, which will be managed by Northern Railways, the Mongolian registered rail infrastructure subsidiary of Aspire Mining. The line will be used for transport of bulk materials, agricultural and general freight as well as passenger traffic.

Aspire owns the Ovoot Coking Coal project in Northern Mongolia, and is targeting production of 5 million tonnes per-annum (mtpa) by 2018 subject to approvals, and granting of licenses by the end of 2014, and the subsequent construction of rail infrastructure.

Aspire says the timing with respect to granting the rail concession agreement is out of its control, and detailed engineering work to support definitive financing negotiations is yet to take place. Nevertheless Aspire's managing director Mr David Paull was encouraged by Friday's parliament ruling, stating that Northern Railways "looks forward to the opportunity the provide a tender proposal for the concession agreement in the near-term."

"The Mongolian parliament's decision provides the rail solution to unlock the value of the Ovoot Project," Paull says. "We expect that this railway, along with the current expansion of the Trans Mongolian Railway towards 100mtpa, will have a dramatic effect on the competitiveness of Northern Mongolian coal in both the Chinese and seaborne coking coal markets. In addition this new railway will bring major economic and social benefits to Northern Mongolian provinces as economic development and regional integration is fast-tracked."