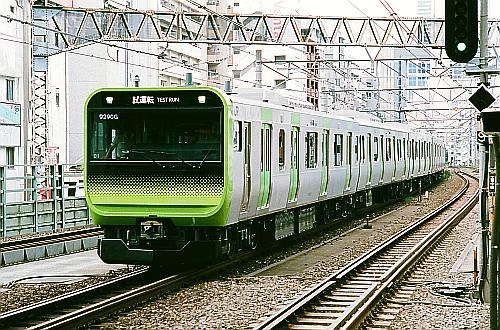 The 1.5kV dc 1067mm-gauge train is formed of five unpowered and six powered vehicles, which will be equipped with SiC VVVF traction inverters, and is also one of the first trains in the JR East fleet to be fitted with oil-free compressors. The train is designed to operate at up to 120km/h, but will only reach a maximum of 90km/h on the Yamanote line due to the short distances between stations.

The E235 features internal and external styling by industrial designer Mr Ken Okuyama, who has previously designed cars for Porsche, Ferrari, and Maserati.

Initially JR intended to operate the trains without any hanging advertising to gauge passenger reaction to alternative forms of onboard advertising, including digital signage. However, this proposal proved unpopular with advertising agencies, which are a major source of revenue for JR East, and hanging advertising will now be retained.

JR East plans to operate the prototype train in passenger service for three years before starting production of series trains. The E235s will replace the fleet of 52 E231-500 EMUs currently used on the Yamanote Line, which date from 2002-05.