The Japanese city of Sendai inaugurated its second metro line on December 6, four years after the region was devastated by the Tohoku earthquake and tsunami. 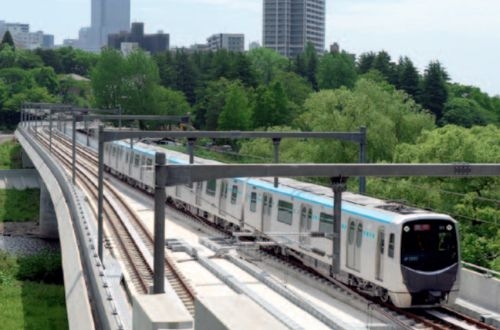 The 13.9km Tozai Line links Arai in the eastern district of Wakabayashi - an area severely damaged in the March 2011 disaster - with the city centre and Yagiyama Dobutsu Koen in the western district of Taihaku.

The standard-gauge line is equipped with 1.5kV dc overhead electrification and serves 13 stations, including an interchange with the metro Namboku Line, mainline services, and the Tohoku Shinkansen at Sendai Station. The journey time between Arai and Yagiyama Dobutsu Koen is 26 minutes and initial ridership is forecast to be around 80,000 passengers per day.

Kinki Sharyo has supplied a fleet of four-car 2000 series trains and all four vehicles in each set are equipped with linear motors to cope with the new line's steep gradients. The fleet of15 trains is maintained at a purpose-built depot near the eastern terminus at Arai.

A new residential district is being constructed around the station at Arai, which will house nearly 20,000 people. Many of the residents are moving to the area from tsunami-hit communities along the Pacific coast as part of a government relocation programme.