INDIAN Railways (IR) celebrated a milestone in the construction of its 1534km Western Dedicated Freight Corridor (DFC) on March 27, when a test train reached the maximum line speed of 100km/h for the first time. 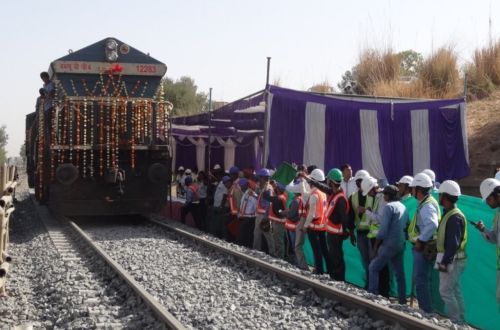 The trial took place on the section between Ateli in the Mahendragarh district of Haryana and Phulera in Rajasthan's Jaipur district, with the train covering the 190km stretch in 3h 52min.

The 100km/h line speed on the Western DFC compares with a maximum of 75km/h for freight trains on IR’s existing network. This is expected to lift the average speed of freight trains on key freight corridors from 26km/h to 70km/h.

The Western DFC runs from Jawaharlal Nehru Port Trust (JNPT) in Mumbai to Dadri near Delhi and will largely cater for container traffic from existing and emerging ports in Maharashtra and Gujarat to terminals in the northern hinterland.

Earlier this month IR announced it had shortlisted five bidders for a contract to supply 200 electric locomotives for the Western DFC.