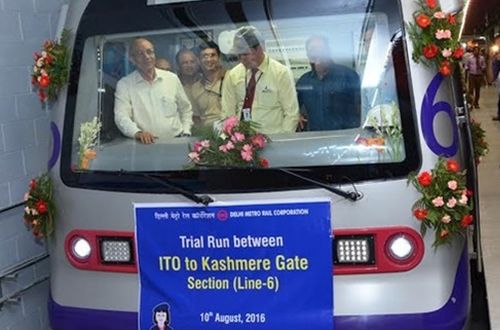 Kashmere Gate station will become the first interchange between three lines on the Delhi metro network, connecting the Violet Line with the Red and Yellow lines.

The testing phase will monitor the response of the train at different speeds, braking of the train and the connection with the Operations Control Centre (OCC), and the behaviour of the track system and overhead electrification will also be analysed consistently throughout the trials.

The completion of the extension will enable residents of Faridabad, Govindpuri, Kalkaji, Nehru Place, and other areas of southern Delhi to travel directly to Old Delhi.

Commuters on the Yellow Line between Central Secretariat and Kashmere Gate will also have the option of using the Violet Line to reach the same destination.

In addition to the extension north to Kashmere Gate, a 3.2km extension from Escorts Mujesar to Ballabhgarh is under construction at the southern end of the Violet Line.