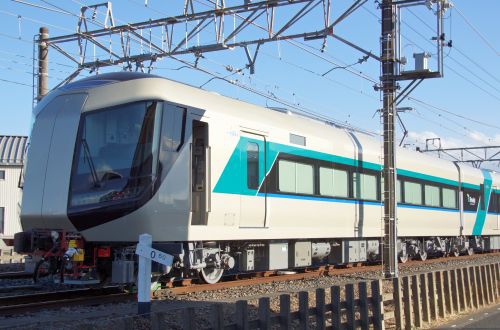 The 1.5kV dc 1067mm-gauge trains will enter service on April 21. The fleet will operate on a number of routes, including through services from Asakusa in Tokyo to Aizu-Tajima in Fukushima prefecture, operating via the Yagan Railway and the Aizu Line.

Styling of the 500 series has been supervised by industrial designer Mr Ken Okuyama and the exterior is intended to reflect the design of the world's tallest tower, the 634m Tokyo Sky Tree.

Each three-car set is formed of two powered driving vehicles and one unpowered intermediate trailer, seating a total of 161 passengers. The aluminium-bodied vehicles are 20m long and 2.87m wide.

The driving cars are equipped with end gangways to enable splitting and joining of trains to serve multiple destinations.

The 500 series is equipped with permanent magnet synchronous traction motors and active suspension, a first for the Tobu Railway, and the trains feature LED interior lighting to minimise power consumption. Free passenger Wi-Fi and at-seat power points will also be available throughout the train.

For detailed data on rolling stock orders around the world, subscribe to IRJ Pro.