DYNAMIC testing has begun on a new express metro link between Taipei and Taiwan's busiest airport, Taoyuan International, which was used by 35.8 million passengers last year. 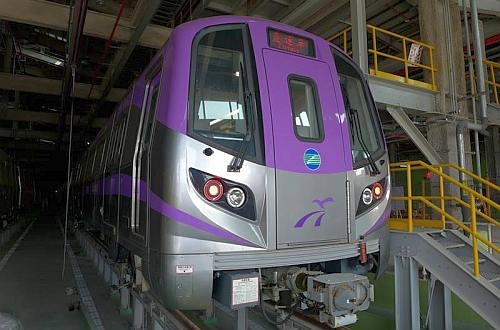 Construction began in 2006 on the 35km Taoyuan International Airport MRT, which starts at Taipei Main Station and serves the districts of Sanchong, Guishan and Luzhu before reaching the airport. The 14-station line is being constructed as a single project with the first phase of the Taoyuan metro Blue Line, which will connect the airport with Zhongli main line station in central Taoyuan.

On April 23 the Taiwan Bureau of High Speed Rail Mass Rapid Transit Engineering Office organised a special trip for politicians, the media and local residents on a test run from New Taipei Industrial Park to Airport Terminal 2, when the train reached speeds of up to 90km/h.

Services will operate every 10 minutes at peak times and every 15 minutes off-peak, alternating between fast and stopping trains, with a journey time of 35 minutes for express services. Each train will accommodate up to 855 passengers and 5200kg of luggage.