Aurizon steps back from Galilee commitment

AUSTRALIAN rail freight operator Aurizon has confirmed that it will withdraw its application to the federally-managed Northern Australia Infrastructure Facility (NAIF) for funding to assist with a rail solution associated with development of the Galilee Basin coal mining region in North Queensland. 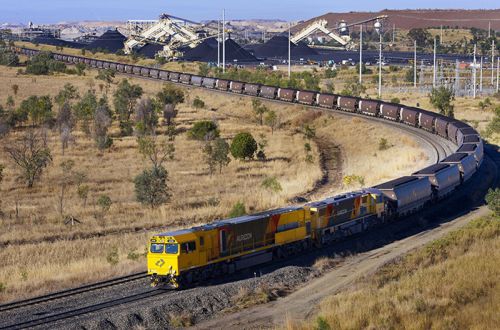 Aurizon managing director and CEO, Mr Andrew Harding, says Aurizon continues to support the development of the Galilee Basin. “When developed it has the potential to provide a major boost to the national economy and create thousands of jobs in regional Queensland,” Harding says.

“We believe Aurizon can play a key role in helping facilitate a multi-user, open access rail solution for the various new mines in the region," Harding continues. "However, while we are in ongoing discussions with several Galilee Basin mine proponents we have not yet progressed to definitive contractual arrangements with any proponent.

"Our NAIF application is, in part, predicated on having customer contracts secured. Given this is unlikely to occur in the near future we believe it is prudent to withdraw the NAIF application. If market circumstances change and our discussions with potential customers progress to commercial arrangements we will look at all possible financing arrangements to develop the rail solution.”

Previously Adani, the most advanced of the Galilee mine proponents, had sought up to $A 1bn ($US 780m) in NAIF grant funding for its own rail and port project, but intense political and environmental scrutiny had seen this application sidelined.

At the end of 2017, Aurizon withdrew from the national intermodal freight market to concentrate on coal and iron-ore opportunities. It has recently been hit with news that Cleveland Cliffs, a major iron-ore customer in Western Australia, will cease mining by the end of 2018.