The 8.5km line offers a journey time of 18 minutes from the city centre to the airport. 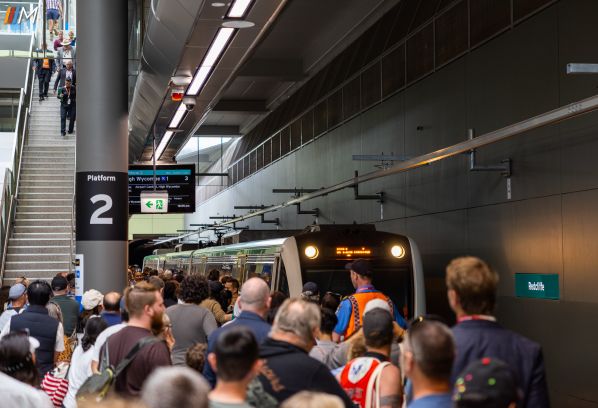 Passenger board the train at the new Redcliffe station.
Photo Credit: Twitter/Metronet

The new line runs underground in twin-bore tunnel from Bayswater with three new stations at Redcliffe, Airport Central and High Wycombe. Fares are capped at $A 5.00 ($US 3.15) and 20,000 passengers are expected to use the new railway in its first year of operation.

The line offers a journey time of 18 minutes from the city centre to Perth Airport with services running every 12 minutes during the peak. Regular weekday services commenced at 05.12 on October 10 with trains remaining in service until around 00.00.

Construction, which was funded using $A 1.37bn of state funds and $A 490m from the federal government, got underway in 2016. However, work was delayed by several issues, including a water leak that led to a sinkhole, workplace safety concerns, labour shortages and supply disruptions resulting from the pandemic.

“There were obviously difficulties because of supply chain issues brought on by Covid and all of the issues that affected the world economy because of Russia's invasion of Ukraine," McGowan said, as reported by ABC. “Also, some of the technical difficulties because of the fact that we were tunnelling through sandy soil, but the great thing is it's now open.”

Webuild led construction of the project in an 80:20 joint venture with local partner NRW alongside a supply chain of 1200 companies of which 91% are local. Webuild describes the excavation of the tunnels using two TBMs as “very challenging” due to the varying geology, and because work took place beneath operating railway lines and the airport’s runways as well as the Swan River where the tunnels reached a depth of 26m, their deepest point.

The joint venture partners will continue to maintain the line under a 10-year contract.

Webuild adds that the project’s sustainability features “mark an important step in the future of infrastructure.” For example, at High Wycombe, a solar panel system has been installed which will generate sufficient power to meet the average summer daylight electricity requirements for all three new stations.

Hitachi was responsible for the design, testing and installation of the line’s 4G telecommunications and signalling systems based on its Microlok interlocking.

Four additional new suburban rail lines remain under construction or planned in Perth under the wider Metronet programme, which will add 72km to the network. Alstom is supplying new-generation six-car C-series metro trains to Perth, including 102 cars for Metronet, with testing of the first commencing in August.

For detailed data on rail projects from Australia and around the world, subscribe to IRJ Pro.