NEW ZEALAND's prime minister Mr John Key attended a ceremony at Auckland Transport's Wiri depot on August 13 to mark the delivery of the last of 57 AM class EMUs from CAF. 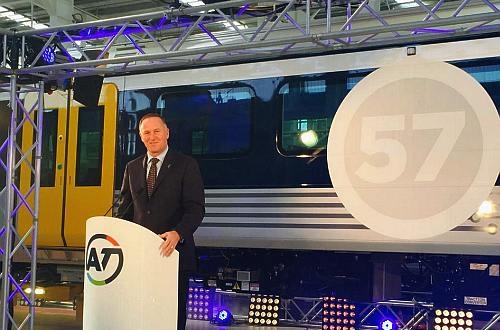 The trains were ordered in October 2011 as part of the $NZ 1.6bn upgrading and electrification of the city's suburban rail network. The first trains entered service on the Onehunga line in April 2014 and full electric services began on the Swanson and Papakura lines on July 20 this year.

The final three trains arrived in New Zealand last week following their sea voyage from Spain and are now going though final checks at Wiri prior to certification.

Each 25kV ac three-car set accommodates up to 375 passengers, 232 of them seated, which according to Auckland Transport is a 40% increase over the capacity of the DMUs and locomotive-hauled trains they have replaced.

Ridership on the Auckland suburban network has surged in recent years from around 3 million in 2003 to 14 million last year.

"We've busted the myth that you can't get Aucklanders out of their cars and the electric trains are fuelling the success," says mayor of Auckland Mr Len Brown. "But their popularity means we're becoming the victims of our own success. At the existing rate of growth, we will reach train service capacity by 2016. This emphasises the urgent need to get cracking on building the City Rail Link."