A CONTRACT has been signed between the New South Wales state government and the Altrac Light Rail consortium (previously known as Connecting Sydney) for the design, construction, operation and maintenance of the $A 2.1bn ($US 1.72bn) Sydney CBD and South East Light Rail line. 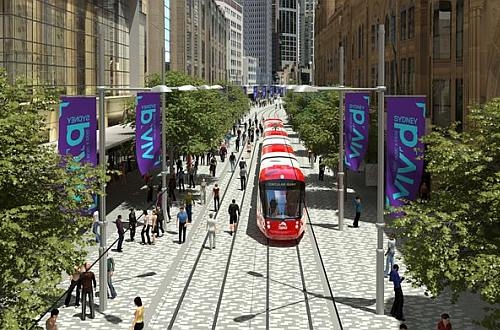 The consortium, comprising Transdev Sydney, Alstom Transport Australia, Acciona Infrastructure Australia and Capella Capital, will finance the project and from mid-2015 will also be responsible for operating the existing Inner West Light Rail.

The 12km line will run from Circular Quay via George Street to Central Station and then through Surry Hills to Moore Park, Kensington, Kingsford, and Randwick. It will serve Sydney cricket ground, Sydney football stadium, Randwick racecourse, the University of NSW, and Prince of Wales Hospital in Randwick.

Construction is due to be completed by 2018 with services scheduled to commence in early in 2019, a year earlier than originally planned.

NSW minister for transport Mrs Gladys Berejiklian said there will be a number of changes from the original specification for the project. From the first day of operation services will carry up to 15% more passengers than previously planned, with the potential to increase ridership by 50% above previous projections. Capacity will be increased with the operation of 67m coupled pairs of LRVs accommodating up to 450 passengers. To reduce the visual impact of the line there will also be catenary-free operation between Town Hall and Circular Quay.

"This project will provide a significant improvement in public transport in Sydney, as well as creating more than 10,000 jobs for our economy," Berejiklian says. "As previously announced, this contract will result in an increased project cost (up from $A 1.6bn) due to improvements to the original scope."