AUCKLAND is today celebrating the start of electrified services on its commuter network as eight new three-car CAF EMUs entered revenue service on the Onehunga line, between Onehunga and Britomart in the city centre. 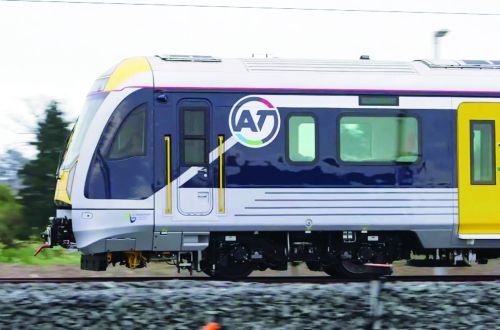 Services began at 05.48 this morning, and despite some minor technical problems, which caused some delays, commuters praised the new services which are reducing journey times and increasing capacity. The introduction of electric services followed an open day on Sunday for 5000 ticket holders who were able to take a 20 minute return journey from Britomart to Newmarket.

The introduction of the trains marks the completion of the Auckland Electrification Project, which had a budget of $NZ 500m ($US 429.3m) and involved installing 3500 overhead masts to support the 25kV ac electrification system. Siemens supplied and installed a new train control system for the project, which includes bi-directional signalling and an updated centralised control system.

CAF secured a $NZ 420m contract for 57 trains in 2011, which are based on the trains supplied to London's Heathrow Express. Each 72m-long vehicle has capacity for 357 passengers, including 230 seated, which is 40% more than the former Perth and Western Australia DMUs which they are replacing, and can operate at a maximum speed of 110km/h. CAF New Zealand will maintain the new EMUs at a new depot in Wiri, South Auckland, until 2026

The introduction of the new electric services has increased calls from the city of Auckland and opposition parties to build the City Rail Link, which involves constructing a new 3.5km twin-bore tunnel between Eden Terrace and Britomart, and will allow more train to pass through the station avoiding a reversal.

Auckland mayor Mr Len Brown says that without an accelerated start of the project, Britomart will soon be bursting at the seams.

However, the government has been reluctant to invest in the $NZ 2.9bn project. It says it is willing to meet 50% of the cost, but only if patronage is on course to reach a target of 20 million trips before 2020 and that central business district jobs are growing by 25%. Brown believes that with the introduction of electric services that Auckland will meet this target "pretty quickly" and has called for the start of construction in 2016.

For an in-depth look at Auckland's commuter network development plans see the December 2013 issue of IRJ, p32, or click here.