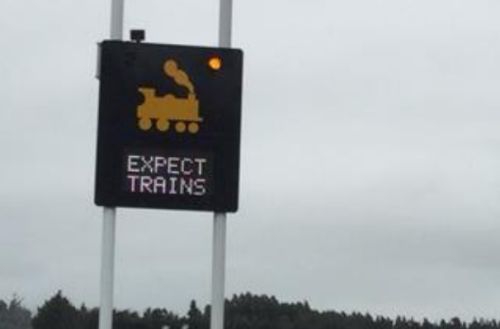 KiwiRail has trialled a road-vehicle-activated ‘Expect Trains’ sign on the approach to level crossings, in a bid to improve level crossing safety. The project focuses on the effects of the signage on compliance and approach speed, as well as evaluating the reliability of the signage.

ACRI has been running a parallel project to evaluate the effects of active signage on driver gaze behaviour that would complement KiwiRail’s findings. The study focuses on the effects of the signage on drivers’ scanning and search behaviours to confirm whether checking activity was increased at the trial site, compared with standard passive level crossing sites. A combination of objective gaze behaviour data measured using an eye tracking system, which records where drivers are looking when passing or approaching the sites, and qualitative information to understand and contextualise gaze behaviour was used to measure the sign’s success.

The sign trial progress has been 100% reliable to date, reducing speeds, and increasing stop line compliance, according to reports published in June after research took place in November 2016.