THE South West Rail Link (SWRL) extension to the Sydney Trains suburban network from Glenfield to Leppington was officially opened to the public on February 7. 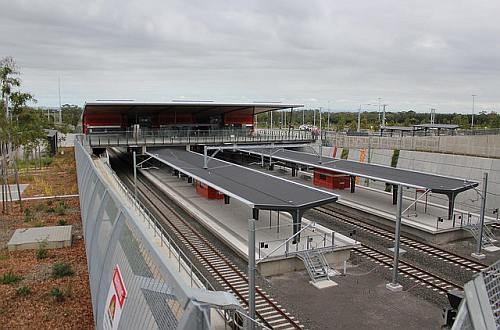 The premier of the state of New South Wales Mr Mike Baird said the $A 1.8bn ($US 1.4bn) 11.4km extension had been completed more than a year ahead of schedule and $A 300m under budget.

A half-hourly Leppington – Liverpool shuttle service operates daily between 05.00 and 00.00 with journey time of 16 minutes.

It is anticipated that through working to other parts of the network will be initiated as part of a future system-wide timetable revision. In the meantime, connections with the rest of the Sydney Trains network are made at either the mainline junction at Glenfield or Liverpool.

Work on the project commenced in 2011 and included a major rebuild of Glenfield station, with a flyover connecting the new line to the existing main line. The project also included the construction of a train stabling facility at Rossmore near Leppington.

CEO of the Australasian Railway Association Mr Bryan Nye congratulated the state government on its achievement, but said with a state election next month, it is critical that rail infrastructure projects remain a priority on the policy agenda of all political parties.

"With the completion of the SWRL and construction underway for the North West Rail Link, it is paramount that momentum continues for the other vital rail projects planned for Sydney, such as the second harbour crossing and the George Street and Parramatta light rail systems," he says.