BRADO Logistics has signed two agreements that will support the expansion of its intermodal freight business in Brazil and Argentina. 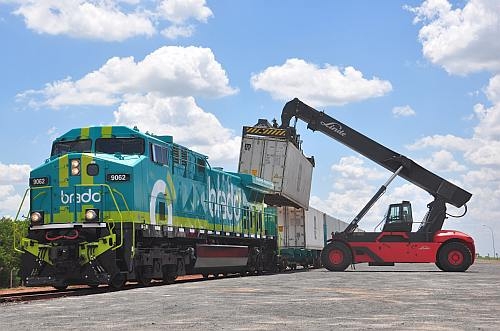 The joint venture between Latin American Logistics (ALL) and Standard Logistics has concluded a partnership with Santos Brasil, one of South America's largest port infrastructure and logistics service providers, for the movement of nearly 8000 containers per year from São Paulo state to the Santos Brasil's maritime terminal in the port of Santos. Brado already operates one service per week on this route, and this will increase to three per week.

Meanwhile Brado has signed an agreement with LTI to cooperate on the Mercosur corridor between Brazil and Argentina. Under the deal Brado will serve LTI Zárate terminal near Buenos Aires. LTI anticpates a 40% increase in volumes on the route through the partnership.

Intermodal is still a relatively small sector of the Brazilian railfreight market, where bulk mineral and agricultural flows still dominate, but it is growing rapidly as railways invest in new facilities and rolling stock.

Currently Brado has a 2% share of Brazil's inland container market, and operates 1,327 wagons, 27 locomotives, and 20 terminals. However, the company achieved year-on year volume growth of 16.7% in the first quarter, and is planning to expand its market share to 12% with the aid of a Reais 1.2 billion ($US 594m) investment programme. This includes Reais 700m for 5000 new and refurbished wagons, Reais 400m for 69 new diesel locomotives, Reais 100m for seven new terminals, and Reais 5m for IT systems. In May it placed an order with Amsted Maxion for 145 Spine Car 80 wagons.

This programme is entirely funded by equity and debt in Brado's balance spreadsheet and risk, with no cash being provided through the railfreight operations of ALL, which owns 80% of the shares in Brado.

"Container transport by rail is becoming a reality in Brazil, and it is unthinkable for us not be a part of this scenario", said Mrs Linda Machado, business director of Brado.