ARGENTINA's Interior and Transport Ministry has concluded contracts for the resignalling of Buenos Aires' Sarmiento and Mitre suburban lines, together with the electrification of the final section of the 60km Buenos Aires Constitutión – La Plata Line. 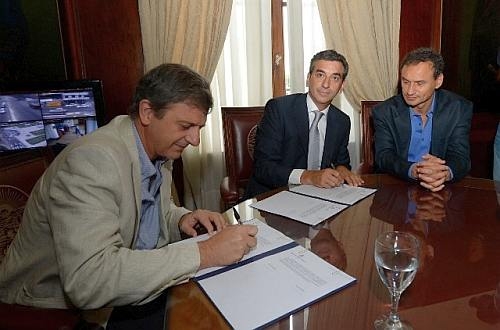 Interior and transport minister Mr Florencio Randazzo was joined by the mayor of La Plata Mr Pablo Bruera on February 5 for the signing of the electrification contract, which covers wiring of the Berazategui – Villa Elisa and Villa Elisa – La Plata sections of the line. The total budget for electrifying this stretch of the route is Pesos 457m ($US 52.8m) and according to Randazzo the work will be completed within a year.

Electrification work began on the Constitutión – Berazategui section in August and according to the minister should be completed within the next few months.

Together with the introduction of new rolling stock, the upgrading of the route is expected to reduce journey times between La Plata and the capital from 1h 20min to 53 minutes.

Siemens also confirmed on February 6 that it has been awarded two contracts to resignal the Sarmiento and Mitre lines, which are both currently being upgraded with refurbished stations, track renewal and new trains.