THE first two of 37 five-car trains being supplied by CAF for the expansion of the Santiago metro network was unloaded at the Chilean port of Valparaíso on April 6 following its long sea voyage from Bilbao. 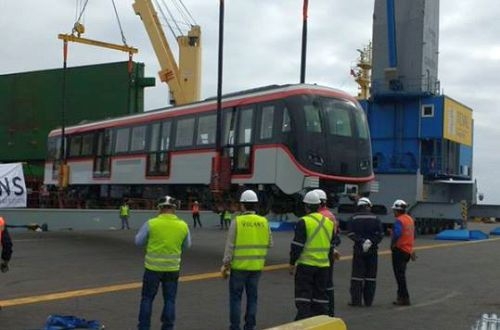 The driverless trains were ordered as part of a $US 451.9m contract awarded to a consortium of CAF and Thales in November 2013 for rolling stock and CBTC for the new lines 3 and 6. As part of the contract CAF will maintain the fleet for 20 years in a deal worth $US 19.1m.

The 15.3km 10-station Line 6 will connect Los Leones station on Line 1 with Cerrilos in the west, and is scheduled to open next year. Line 3 will run for 21.7km from the northern district of Huechuraba to the city centre, where it will follow Avienda Mattam passing beneath Irarrazával, before terminating at Larraín. The 18-station line is due to open in June 2018.