A BILATERAL agreement was signed in Buenos Aires on October 15 that will pave the way for the restoration of freight services across the border between Chile and Argentina. 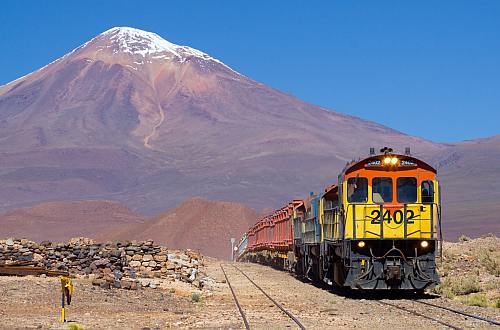 The line from Salta, Argentina, to Palestina in Chile via the de Socompa pass has never lived up to expectations and has seen virtually no international movement for five years. However under the new agreement, Ferronor will be permitted to once more collect freight on the Argentinian side for conveyance west, principally to the Pacific port of Mejillones.

The route within Chile amounts to some 350 km, almost half of which, from Augusta Victoria to the Pacific coast, is owned by the Antofagasta Railway (FCAB).

Although much of the route on either side of the border has remained in use for domestic traffic, international trains will not start to roll immediately because disused sections of track need to be rehabilitated.

The impetus behind the reactivation comes from mining companies in Argentina, which are interested in exporting products such as borax, lithium and copper to Asia.

Of the four railways linking northern Chile with neighboring countries, only one is currently operational – FCAB's line which runs down from the border with Bolivia near Ollagüe, to the ports of Antofagasta and Mejillones. However, the remaining three are all in differing stages of reactivation.

The reopening of the Arica to La Paz Railway is on track although somewhat behind schedule. Less advanced is the 61km Tacna – Arica Railway (FCTA), which links Peru with Chile. This line has seen very little freight traffic in recent years, and passenger operations ceased in March, due to the poor state of the track. The FCTA is under the administration of Peru's Tacna regional government, which lacks the funds needed to carry out the neccessary repair work. A plan to tender operation of the line is mooted, with help from Proinversión, a central government agency.