THE first of 42 driverless metro trains being supplied by Hitachi Rail Italy (HRI) for Lima metro Line 2 was loaded onto the MV Cerinthus at the port of Salerno on August 16 in readiness for its 29-day sea voyage to Peru. 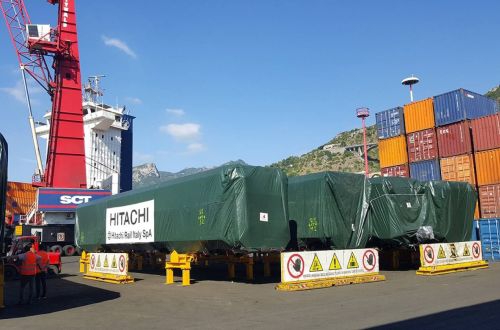 The ship will dock in the Peruvian port of Callao, where the metro cars will be unloaded for the short road journey to Lima.

HRI is a member of the Nuevo Metro de Lima consortium, which was awarded a 35-year concession in 2014 to finance, build, operate and maintain Line 2, which will run for 27km from Ate Vitarte in the east to the city centre and Callao in the west.

The PPP contract includes construction of an 8km branch to Jorge Chavez International Airport, which will eventually form part of Line 4, as well as 35 stations, a depot, electrification, signalling and telecoms systems, and the supply of rolling stock.

HRI is supplying 42 six-car articulated trains for Line 2, each accommodating up to 1168 passengers including 168 seated.

Hapag-Lloyd has been awarded a contract to transport all 252 vehicles from Italy to Peru, and deliveries are due to be completed by February 2019.

One of the trains underwent dynamic testing at the VUZ Velim test track in the Czech Republic during July.