BAVARIAN minister of transport Mr Joachim Herrmann and Czech transport minister Mr Dan Ťok announced on July 26 that Munich - Prague services will almost double in frequency from December, with aspirations to reduce the journey time from six hours to less than four hours by 2030. 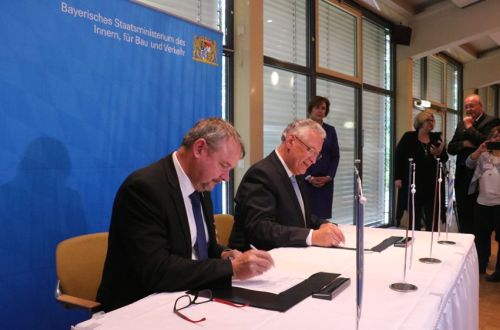 The plans were unveiled at the first Bavarian-Czech Railway Summit, which was held in the border town of Furth-im-Wald and attended by German transport minister Mr Alexander Dobrindt as well as senior managers from Czech Railways (CD), CD Cargo, Czech infrastructure manager SŽDC, and German Rail (DB).

The changes, which come into effect with the start of the 2018 timetable on December 10, will increase Munich - Prague services from four to seven trains per day in each direction, effectively providing a two-hourly frequency. “This is a concrete offer for the European tourist centres of Munich and Prague, which will also benefit commuters along the route,” says Hermann.

Herrmann says the most pressing issue for Bavarian-Czech links is now electrification of the line from Nuremberg to the Czech border via Marktredwitz and Schirnding. Preliminary planning has begun for electrification for the 124km Nuremberg - Marktredwitz line, which is due to be completed in 2022. Hermann is seeking a “quick clarification” on the future of the cross-border stretch from Marktredwitz to Cheb in the Czech Republic.

During the summit Hermann presented the findings of a feasibility study into the acceleration of Munich - Prague services, which has been developed with the support of stakeholders on both sides of the border. Of the 11 variants originally considered, three options with costs ranging from €2bn to €2.5bn are considered by Herrmann to be “useful and feasible.”

On the Bavarian side, all variants require electrification of the line from Regensburg to the border, and track-doubling of the line beyond Schwandorf. Enhancements will also be required on the Czech side.

Herrmann signed a joint declaration with DB group representative for Bavaria Mr Klaus-Dieter Josel pledging to develop plans for the upgrading of Schwandorf - Furth-im-Wald line. “Even if we are not responsible for planning financing, we are doing this voluntarily to speed the project up,” Herrmann says.

The two sides also agreed to work together to optimise regional passenger services on the other two lines from Bavaria to the Czech Republic: Selb - Asch and Plattling - Bayerisch-Eisenstein. Electrification is a shared long-term objective for these lines.