Betuweroute to be used for passenger diversions

DUTCH infrastructure manager Prorail has prepared the Betuweroute freight line between the port of Rotterdam and the Dutch-German border near Emmerich as a diversionary route for Amsterdam - Frankfurt ICE services. 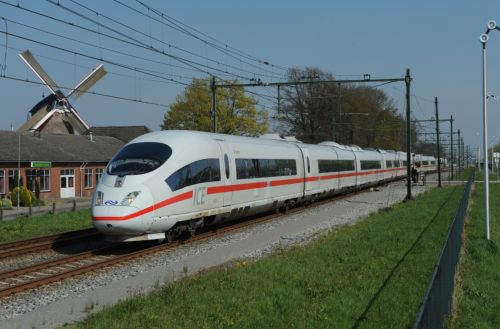 Other parts of the Betuweroute cannot be used for passenger operations as there are tunnels without emergency facilities for passengers.

The first passenger service is scheduled for 25 November 2017 and tests with multi-system ICE-3M high-speed trains have already taken place.

Prorail is programming an intensive programme of works on the Arnhem - Utrecht line and diverting international ICE services via the Betuweroute is considered less disruptive than routing trains via Eindhoven and the Venlo-Kaldenkirchen border crossing, which has been used for previous diversions.

The development is remarkable as the Betuweroute, which opened in 2007, was designed specifically as a freight-only line, excluding any use by passenger train services. This was welcomed by the Betuweroute project management for keeping costs down, as it meant additional emergency facilities required for passenger operation could be excluded from the project.

ICE- 3Ms normally operate on the conventional Dutch 1.5kV dc electrification system, but will run under 25 kV 50Hz ac power on the Betuweroute. The trains are also equipped with ETCS Level 2 equipment of the right type for operation on the Betuweroute.