SWITZERLAND’s second-largest railway BLS says it is still pushing for a concession to operate long-distance services beyond its own network, despite the recent failure of talks with Swiss Federal Railways (SBB) on the future of domestic inter-city services. 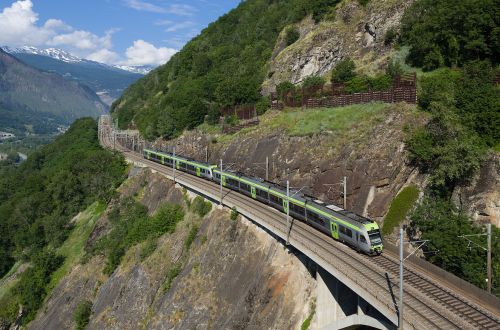 Under the current arrangement, SBB holds the concession for running domestic long-distance services jointly with BLS and South Eastern Railway (SOB). The concession is due to expire at the end of the year, but negotiations over joint operation have failed and BLS is now preparing an application to the Swiss Federal Office of Transport (BAV) for its own concession.

However, speaking at BLS’ annual results press conference on April 19, CEO Mr Bernard Guillelmon said he remains optimistic that a solution can be found: “We see SBB as a partner, and we want to work together on further developments. We are still in discussion.”

This would enable the operation of four trains per hour between Bern, Aarau and Zurich.

BLS says it is currently working on its concept in close cooperation with the cantons concerned, and aims to submit its concession application to BAV by the beginning of September.

In addition to its plans for a long-distance network, BLS is also working on a concept for the expansion of its RegioExpress network centred on Bern to offer half-hourly services on six routes.

Nearly all sectors recorded positive figures, with BLS Network (infrastructure) achieving a profit of SFr 2.6m (SFr 3.8m in 2015) and BLS Cargo boosting its result from SFr 300,000 to SFr 1.5m. Only the regional passenger sector suffered a loss, with a deficit of SFr 3.8m, mainly due to reduced subsidies.

Passenger numbers rose by 4% to 62.5 million, most of them carried by rail (BLS also operates bus and lake shipping services), while punctuality improved by one point to 95%.