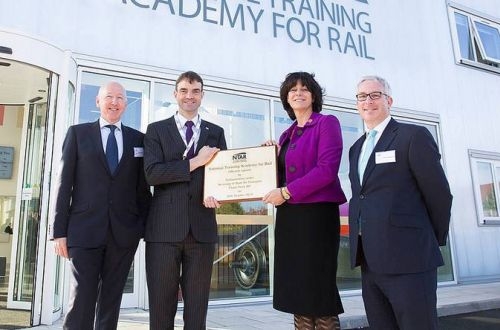 The new academy will be the hub of future rail engineering excellence in Britain with students at the new centre set to benefit from access to the latest digital, 3D and virtual-reality equipment to provide them with the skills to work as engineers, technicians and managers in the 21st century railway industry.

"The opening of the National Training Academy for Rail is a major milestone towards delivering a network of transport infrastructure skills colleges and training academies," Perry says.

The project was jointly funded by the British government and Siemens. Facilities at the new centre include the latest digital signalling equipment, a de-constructed train, and a virtual reality and 3D simulation room, where students can use Oculus Rift headsets to understand how different components work.

"Industry-led training will ensure that learners are getting the skills employers want," says Mr Nick Boles, Britain's skills minister. "Many rail firms have also designed new apprenticeships standards for roles like rail engineering technician to deliver the skills needed for rail to expand here and internationally."