BRITAIN’s secretary of state for transport Mr Chris Grayling announced on October 12 that the government has allocated infrastructure manager Network Rail (NR) a budget of £47.9bn for operation, maintenance and renewals in Control Period 6 (CP6), which runs from April 2019 to March 2024. 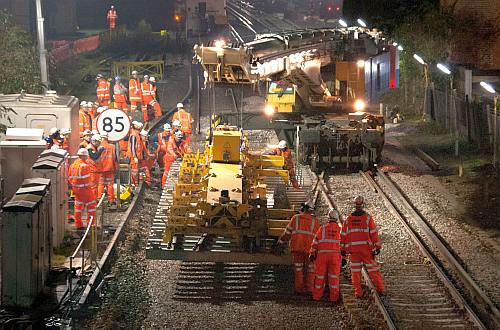 According to the Statement of Funds Available (Sofa), the Network Grant - funding from the Department for Transport and Transport Scotland - will reach a maximum of £34.7bn, compared with £18.3bn in CP5. The remaining funds will come from other sources, primarily revenues from track access charges and property income.

Following a series of major cost overruns on enhancement projects, the Sofa for CP6 features a number of significant changes compared with previous control periods. While funding for the early stages of developing new projects are included in Sofa, the government will allocate funds separately for major enhancements, based on the principles set out in the Memorandum of Understanding on rail enhancements agreed by the DfT and NR in March 2016 (PDF link). This is a departure from previous control periods, when enhancements were budgeted as part of Sofa.
Grayling confirmed that a new funding process will be introduced for major upgrades and enhancements with the aim of providing “more rigour in investment decisions.”

In another deviation from previous practice, the DfT has not defined a profile of either NR’s overall expenditure or the Network Grant across CP6. A profile of operations, maintenance and renewals spending will be considered by the Office of Rail and Road (ORR) as part of the 2018 Periodic Review of NR’s activities, which will take into account NR’s route-based strategic planning.

The DfT says that the “secretary of state expects the industry and ORR to continue to work together to pursue actual expenditure below that assumed in Sofa” with a focus on efficiency improvements and a “strong and robust challenge on cost and deliverability” from the regulator.
“Continued high levels of investment in our railway is essential to create the jobs, housing and economic boost our country needs to prosper,” says NR chief executive Mr Mark Carne. “Today's announcement shows the government's endorsement of this approach.

“Network Rail is transforming into devolved businesses to better respond to its local customers and communities. This local focus, combined with opening up the funding, financing and delivery of investment projects to third parties, will help to drive efficiencies and value for the taxpayer.
“We will submit our detailed plans to the regulator in the next few months that will help to finalise the railways funding for the five years to 2024 and continue to drive our company's transformation to better equip it for the demands ahead.”

Mr Darren Caplan, chief executive of the Railway Industry Association (RIA), welcomed the additional funding for NR in CP6, but warned of an impending gap in renewals activity at the end of CP5. “By developing more collaborative working practices, investing in new technologies and innovations, and working more closely with Network Rail and the government, the supply chain is confident it will deliver the maintenance and upgrades required to help meet the growing demand for railways from both passengers and freight,” he says. “To deal with the increased activity in CP6, it now becomes even more important to address the reduction in renewals volumes during the last 18 months of CP5. RIA continues to urge the government to bring forward £500m of CP6 funding into CP5 to bridge that gap, increase the level of design “development work,” and ensure our world-class supply chain can support the UK’s railway both now and in the future.”

Sofa allocates £3.6bn for operation, maintenance and renewals on the Scottish network during CP6, although the Scottish government says the settlement falls short of what is needed to fund its full programme for 2019-2024.

“This £600m shortfall will do serious damage to Scotland’s railways and our own future enhancement projects,” says Scottish transport minister Mr Humza Yousaf. “The Scottish government has taken a constructive approach simply requesting the same funding we have received previously, accounting for inflation.

“We want to continue to invest in improving our rail network and services to meet future demand, but changes to be introduced by the UK government are putting at risk our ability to do so in full and this will have a massive impact.”