A PROJECT to understand and address the causes of poor electrical transfer on the third rail dc network has been launched as part of the recently-formed alliance between British infrastructure manager Network Rail and train operator Southern. 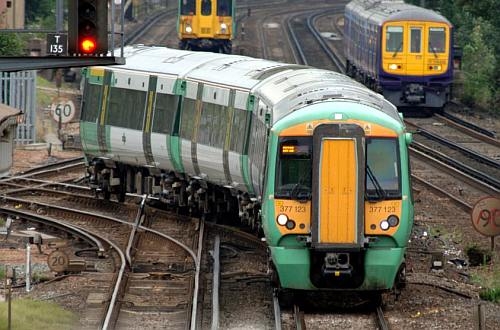 A Bombardier class 377 emu has been modified with the addition of non-current collecting shoegear to an intermediate bogie, which is also equipped with laser displacement sensors to measure the height of the shoe arm, targeting areas of poor performance. The system, dubbed Third Rail In-Service Monitoring Equipment (Trime), will allow the alliance to identify locations on the Southern network where excessive forces are present in the interface between shoe-gear and the third rail.

"By working with Network Rail on this project we aim to reduce the instances of shoe-gear damage and so reduce delays and reduce costs associated with disruption and maintenance," says Southern fleet director Mr Gerry McFadden. "First results have been really positive which has to be great news for our passengers."

Initial data processing has focused on looking for locations where the shoe-gear position is high, generally where there is a large overshoot in response to hitting a facing ramp or an irregularity in the conductor rail. If the shoe loses contact with the third rail it follows a characteristic parabolic shape, accelerating downwards with gravity and the force of the return spring. At facing ramps the behaviour varies from benign to overshoots taking up most of the physical movement allowed by the shoe-gear design.