BRITAIN's Department for Transport (DfT) issued an invitation to tender (ITT) for the new Northern and TransPennine franchises on February 27, confirming that the fleet of Pacer diesel railbuses built in the 1980s and currently in use with Northern Rail will be eliminated with a new build of at least 120 multiple unit vehicles. 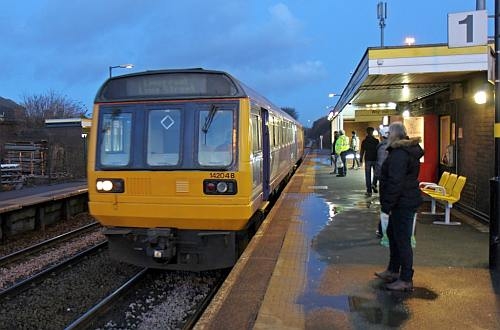 The ITT specifies that all rolling stock must run on bogies, which effectively excludes the continued use of four-wheeled class 142 and 144 Pacer units. The franchisee will be required to provide a minimum of at least 120 new multiple unit vehicles for use on non-electrified routes and these must enter service no later than January 2020. Northern currently operates a fleet of 214 Pacer vehicles (102 sets), indicating that Northern will require existing DMUs released by electrification in addition to new trains to completely eliminate the Pacers.

While it is likely that the new trains will be DMUs, the ITT suggests that a battery-equipped Independently-Powered EMU (IPEMU) with a battery range comparable to or better than that on the unit recently tested on the Harwich branch in eastern England could be an option.

However, some senior government figures have raised doubts about the requirement for new trains in the ITT. In a letter to secretary of state for transport Mr Patrick McLoughlin on February 26 (PDF link), the DfT's permanent secretary Mr Philip Rutnam expressed concern about the business case for Pacer replacement on the basis specified in the tender. Rutnam states that analysis gives a benefit-cost ratio of 0.35 for new trains for Northern over 30 years and argues in favour of Pacer life extension with modifications for RVAR compliance. With a general election scheduled for May, such arguments look likely to fall on deaf ears.

The Northern ITT also stipulates that all existing rolling stock must be refurbished and upgraded in line with the requirements of the Rail Vehicle Accessibility (Non-Interoperable Rail System) Regulations 2010 (RVAR) which come into effect in 2020.

Services on many routes will be doubled and the winning bidder will be required to provide additional off-peak and Sunday trains. The franchise will also include passenger Wi-Fi on all trains by 2020, at least £30m for station improvements, and a £13.8m customer and communities improvement fund.

Three bidders are shortlisted for the Northern franchise:

The TransPennine franchise also includes a requirement for additional rolling stock to increase capacity and accommodate increased frequencies. The DfT has asked bidders to look at options for new services such as Liverpool – Edinburgh/Glasgow, Crewe – Manchester Airport, and the extension of Liverpool – Newcastle services to Edinburgh and Wi-Fi will also be introduced on all trains by 2020.

The shortlisted bidders for TransPennine include:

The deadline for submission of bids is 28 May for TransPennine and 26 June for Northern .

Both new franchises will begin in February 2016.