AFTER publishing a call for tenders in September 2017, Hungary’s National Infrastructure Development Agency (NIF) has cancelled a project to electrify the 53km Zalaszentiván - Nagykanizsa line, in accordance with a governmental decree which updates the list of projects eligible for funding from the state, and eventually the European Union (EU). 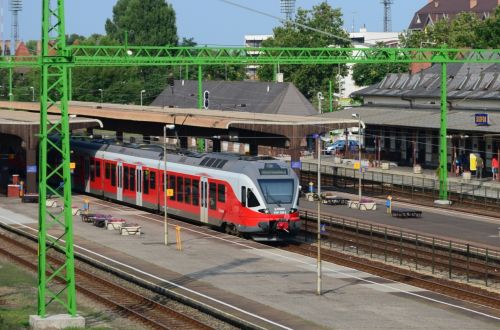 The project has been cancelled due to a series of cost overruns in major rail projects, and will not be eligible for EU funding until the next EU budgetary period, which starts in 2020. This leaves a gap in the electrified network in western Hungary which will not be filled for at least four years, unless the line is transferred from Hungarian State Railways (MÁV) to Györ-Sopron-Ebenfurth Railway (GySEV), which has a good recent record of delivering electrification projects.

Tendering for electrification and modernisation of the 64.5km Szabadbattyán - Balatonfüred section of the Budapest - Tapolca line was abandoned early last year. Procurement recently restarted for this project, but the specification has been revised to eliminate a substation and reduce the number of station underpasses and elevators, heated points, and centralised traffic control. Only 5.4km of track will be rebuilt, compared with 11.5km in the original tender and the score allocated to cost in the bid evaluation has increased from 50% to 70%.

The project will take 30 months to implement, meaning Budapest - Balatonfüred electric services could start by December 2020.