THE Danish parliament approved the Construction Act for the Danish section of the Fehmarn Belt fixed link on April 28, authorising the construction of the tunnel to Germany and rebuilding of the connecting line from Ringsted to Rødbyhavn. 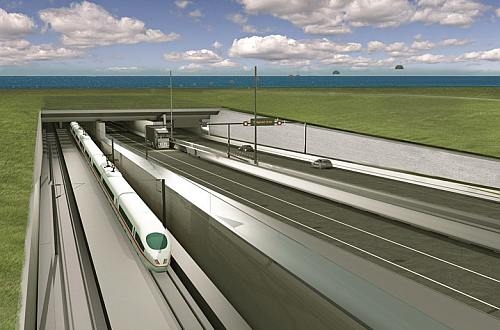 The fixed link will comprise an 18km immersed tube tunnel linking Rødbyhavn on the Danish island of Lolland with Puttgarden on the German island of Fehmarn. The existing line from Ringsted to Rødbyhavn will be electrified and upgraded for 200km/h operation with the construction of a second track to provide capacity for higher levels of traffic.

The new connection will reduce the distance by rail between Hamburg and Copenhagen by 160km and cut journey times to around two-and-a-half hours.

The Construction Act constitutes final environmental approval for the project in Denmark and authorises state-owned companies Femern A/S and Femern A/S Landanlaeg to construct and operate the link together with associated land works in Denmark. It also grants powers for compulsory purchase of land, installation of wind turbines, and the construction of a tunnel segment factory east of Rødbyhavn.

However, construction cannot begin on the tunnel until the German federal government has completed a review of the overall economics of the project and this process is due to be completed by the autumn. The German state of Schleswig-Holstein will also need to grant formal approval in the form of a building permit, and this has yet to be concluded.

Femern A/S has been negotiating with international consortia, which have submitted bids for major construction contracts, and the company will issue a comprehensive financial assessment and an updated construction schedule at the end of the summer.