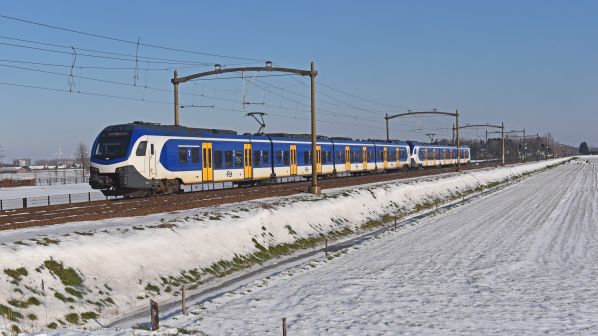 The worst of the winter weather had passed by February 12 although NS will not resume normal operation until February 16.
Photo Credit: Quintus Vosman

Point failures were the primary cause of the disruption despite the use of heating systems. A member of a Prorail team working at Hoofddorp station reported that as soon as snow was removed from points, new snow was blown onto the track by the strong wind, blocking the switch’s functionality. The Dutch railway network has over 6000 points.

Netherlands Railways (NS) was first to suspend operation on the evening of February 6 followed by the regional Dutch operators. Most regional train operators started up a large part of their regular service on February 9. NS restarted operation a day later, but only with a ‘reduced winter timetable,’ which meant hourly Sprinter services and no inter-city services.

NS frequencies increased again on February 12 with a higher number of Sprinter services and some inter-city trains. However, regional operator QBuzz was forced to delay resumption of Dodrecht - Geldermalsen trains, as Prorail continued with point repairs at Gorinchem station. A limited train service was offered with passengers required to change at Gorinchem. The normal timetable resumed on February 15.

Rail freight operation was also badly affected. The Port of Rotterdam, Europe’s largest seaport, was not accessible by trains for six days. Docks, quays and sidings were unable to handle any trains, leaving departure freight in the port. Sidings had to be dug out and points were frozen. In addition, the Kijfhoek freight yard could not process any freight wagons while the Betuweroute freight line between the port of Rotterdam and the German-Dutch border near Emmerich was closed.

A preserved diesel locomotive 2205, which manufactured by Alan, Rotterdam, in 1955, and withdrawn by NS in 1991, was deployed with a snowplow to clear snow on the Betuweroute. However, with no ETCS onboard equipment fitted, the line was closed for use by the locomotive, which returned via a triangle junction at Arnhem.

Outgoing secretary of state for infrastructure, Mrs Stientje van Veldhoven, was questioned in the Dutch parliament about Prorail's performance and inability to keep the railway working. In the recent years the national budget for maintenance and management of the railway, managed by Prorail, has been reduced considerably .