EB takes over in eastern Thuringia

ERFURT Railway (EB) took over operation of Germany's East Thuringia Diesel Network regional concession on June 10. EB will operate a total of 4.6 million train-km per year under the contract, which runs until December 2024. 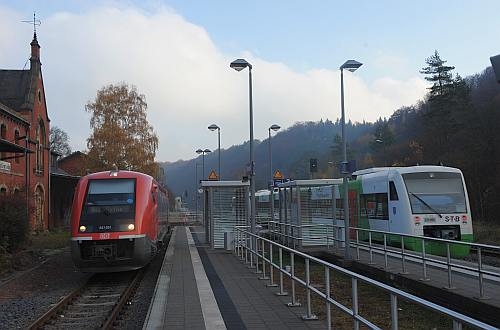 Several improvements have been implemented under the new contract, including hourly services between Leipzig, Gera, and Saalfeld throughout the day with journey times reduced by up to 15 minutes to around 2h 2min. Frequencies have also been stepped up on the Weimar – Kranichfeld line, providing a 30-minute interval service in the morning peak.

EB has ordered 37 RS1 Regioshuttle railcars from Stadler Pankow for the concession, of which 13 have been delivered so far. Because German Rail (DB) appealed against the decision to award the contract to EB, these trains were ordered later than planned, meaning EB has been forced to hire rolling stock from other operators, including DB.

Shortly before EB took over the concession, Thuringia State Transport Authority, in cooperation with Vogtland Public Transport and Bavarian Railway Company (BEG), also announced a new two-hourly Regional Express service between Gera and the Bavarian town of Hof would be included in the new timetable. Seven trains per day operate on this route, with a journey time of 1h 23min and connections at Hof to services to Munich and Nuremberg.

EB is 100% owned by the city of Erfurt and operates regional passenger services on non-electrified lines across much of Thuringia and northern Bavaria. Next year however it will surrender two lines in western Thuringia to German Rail (DB).