Refugees able to travel for free across Europe while aid trains operate to Ukraine. 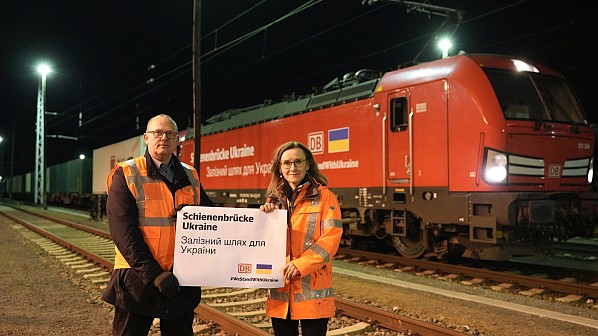 EUROPEAN operators are continuing to offer support for Ukraine by offering free travel for refugees fleeing the country following the Russian invasion as well as operating aid trains to the war-torn country.

Ukrainian Railways (UZ) has evacuated more than 2.5 million people by rail following the start of Russian’s invasion of Ukraine on February 24. UZ has been operating evacuation trains across Ukraine, as well as transporting refugees to borders with Poland, Slovakia, Hungary and Romania.

In various cities across Ukraine commuter trains are still operating despite the invasion.

UZ says that on March 17 it carried almost 6200 tonnes of aid on 986 passenger and freight trains. This included aid from abroad.

UZ says that overnight on March 12-13 a passenger train was attacked by Russian forces near Brusyn station in the Donetsk region. The train was running to Lyman to collect refugees from the Luhansk and Donetsk regions. UZ says one of the conductors was killed and another was injured.

PKP Intercity says that more than 500,000 Ukrainian citizens have travelled free of charge on its trains across Poland. PKP Intercity says nearly 233,000 refugees travelled by rail from the border with Ukraine mainly to Warsaw, Kraków, Wrocław and Katowice. Of those travelling to other countries, most people were bound for Berlin.

From March 9 until further notice, PKP Intercity said all trains from Warsaw, Przemyśl (via Kraków) and Gdynia to Berlin and Frankfurt have been reclassified as inter-city trains which enables free travel for Ukrainian citizens in standard class.

German Rail (DB), working with PKP Intercity, has launched an additional connection for refugees travelling to Hanover and Munich.

The Community of European Railway and Infrastructure Companies (CER) said on March 18 that it is working closely with its members to track the rapidly evolving situation. CER says it is crucial to ensure the onward flow of refugees towards safe havens beyond the border regions as well as to continue to support the supply of aid into Ukraine.

Hungarian state railway MÁV-Start had issued 105,000 tickets to Ukrainian citizens for free travel by March 15, while in Slovakia, national passenger operator ŽSSK had issued 75,000 free tickets by March 13. Czech Railways (ČD) has helped more than 100,000 refugees and DB has distributed more than 100,000 of its free “helpukraine” tickets which have been recognised in several countries.

French National Railways (SNCF) estimates that 10,000 free trips had been made by March 15, while Spanish operator Renfe has provided more than 4500 free tickets. Danish State Railways (DSB) had transported 1300 refugees up to March 13. Eurostar has offered Ukrainians free travel from any of its stations.

Trains carrying aid are also running into Ukraine. These have been organised by several European operators. DB, working with DB Cargo, DB Cargo Poland, PKP LHS and UZ has created a rail land bridge, with the first train departing Germany on March 11 from Seddin marshalling yard, operating via Kraków and destined for Kyiv. The train consisted of 15 containers carrying 350 tonnes of aid.

SNCF Fret, working with SNCF Network, leasing company Ermewa and DB, is also preparing to operate aid trains carrying around 500 pallets of supplies collected in France. Swiss Federal Railways (SBB) has also been operating trains with PKP to transport aid to Ukraine. Aid collected in the Czech Republic is being transported by ČD Cargo wagons to Ukraine.

An in-depth report into the industry’s response to the invasion will be published in the April edition of IRJ.